In the past 100 years, we can credit the women’s movement for many successes. Reproductive rights, equal pay, and laws on domestic violence now have a legitimate place on political agendas, and in theory, gender equality has been accepted as a goal for democratic societies. But the gap between what equality should be and what it is remains vast.

Furthermore, there is a growing divide between feminism and the struggle for social justice for all. I believe that despite increasing opportunities for women in the workplace and the growing appeal of the feminist movement, there is still plenty of work to be done. 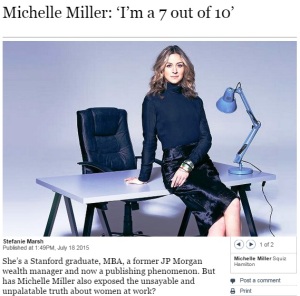 As a result of the women’s movement, the number of women engaged in paid work (as opposed to unpaid household/care work) has increased dramatically. Women now rank among CEOs of Fortune 500 companies, and magazines and blogs regularly praise the accomplishments of these powerful women.

The satirical website Clickhole published a parody of the dizzying rise of these women, entitled 7 Female CEOs Who Inspire Us All To Be Cogs In The Capitalist Machine. Clickhole’s article raises an important question: what really are we praising about these women?

Critics argue that despite successful careers, these women lead corporations that thrive in a system where women around the world continue to suffer; that these women reproduce the patriarchal obsession with power and money, and encourage sacrifice of a work-life balance (the debate about Yahoo’s Marissa Mayer and maternal leave policies deserves a separate article). Should we applaud the behavior of these women or question if they’ve fallen into the trap of reproducing patriarchal elitism?

The Increasing Appeal of Feminism

Alongside debate on what being a successful career woman really means, we are seeing greater public acceptance of the word ‘feminist’ (the fact that it remains a dirty word by and large is shocking).

When Beyoncé projected the word ‘Feminist’ on stage during the 2014 Video Music Awards (VMAs), she received rapturous applause from fans and critics alike. Feminists were excited that Beyoncé was increasing the appeal of feminism as a fundamentally important idea among her audience. There was backlash too, but mostly on the part of people who think women showing their skin on stage are reinforcing the concept that sexualization is the key to success. Ms. Magazine responded well to this accusation:

“Beyoncé is in control of her art and her image, and many of her songs center on the independence and empowerment of women. If our bodies are our own, why shouldn’t any of us be allowed to claim feminism and prance around the stage in a leotard?”

No doubt, women should be able to prance around in leotards as they please, and we should challenge those ‘police’ dictating a narrow idea of what it takes to achieve gender equality. (For a much longer and more insightful defense of Beyoncé, read this article from Bitch Magazine.)

Aside from the demands of the ‘feminist police’, an important question remains: what kind of feminism ideals are we supporting? By idolizing public ‘feminist’ figures such as Beyoncé and applauding the rise of female CEOs, are we not shining the spotlight primarily on the economic success of the elite class? We need to recognize that the kind of feminism promoted by public personas like Beyoncé sits comfortably within a capitalist structure.

By advocating that we should all “be who we want to be”, audiences become so focused on emulating the success strategies of these women that they forget the wider structural dimension of inequality. With powerful role models such as Beyoncé, we assume that equality between genders is possible within the current system, a system that defines success by financial worth or public appeal.

This has a paradoxical effect: feminism is, and always has been, a social movement comprising many different stakeholders—wealthy or poor—fighting for a single cause. When we individualize feminism and reduce the idea of feminism to “everybody should be who they want to be”, we run the risk of forgetting that we need to work together as a movement to achieve change.

Feminism Needs an Ethics of Solidarity

What feminism needs is an ethics of solidarity: we need to stand with everyone who is struggling against the global system of exploitation that we are caught in. A social arrangement where women can become CEOs of multinational corporations does not help the billions of women who face poverty, violence, and other hardships. We need to pay attention to struggles for human liberation around the world—even if they do not have an explicitly feminist agenda—and support them.

The concept of intersectionality does not push feminism far enough: it perpetuates the obsession with individual identity and thereby fails to take the structural dimension of inequality seriously. When we state that women not only face disadvantages because of their gender but also because of their class or religion, we continue to focus on individuals and their privileges, as opposed to capitalism and colonialism—the two systems that created the current conditions and distribution of privileges, and that continue to maintain them.

Feminism needs to be about more than just being yourself. Everyone being themselves is the goal; to get there, we need to do more work first. We must not forget that feminism can only advance the equality of genders if it comes with an ethical commitment to human liberation.